The SMO uses data models to drive the configuration and management of the elements that make up the O-RAN solution over the NETCONF protocol. For an example of how the SMO (NETCONF client) interacts with the RIC, CU, DU and RU (each of which are NETCONF servers), see diagram below: 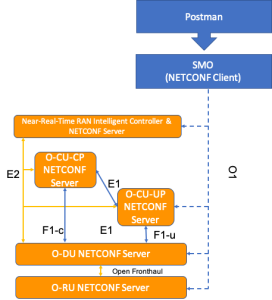 See updates here on details of an application package catalog.