Function test is conducted to verify the functionality of the Non-RT RIC as well as the individual components.

A test engine and a number of test script is used as a foundation for the test environment.

The test environment uses docker images both the Non-RT RIC components as well as for the the needed simulators.

Function test is normally started in "docker-mode" meaning that images will be started as container in a private docker network. As an option, the same test case also executed in a minikube environment. Running in minikube is still in an experimental state so docker should be used as a the standard execution environment.

The test scripts are designed in a way so that the same script can be used for testing of the functionality in the master branch as well as previous release(s). The supported branches/releases are indicated by the existence of a environment variable file in the test/common dir with the name of the branch. The environment for master has the name of coming release.

The majority of the test scripts test one or several aspects of the functionality but there is also test scripts for stability tests over longer period of time (currently 3 days max intensity test).

The picture below shows the setup used for function tests. Non-RT RIC components in orange, simulators in light blue and the test environment in dark blue. The purple arrow is outside the scope of the test but is used for demo test scripts. 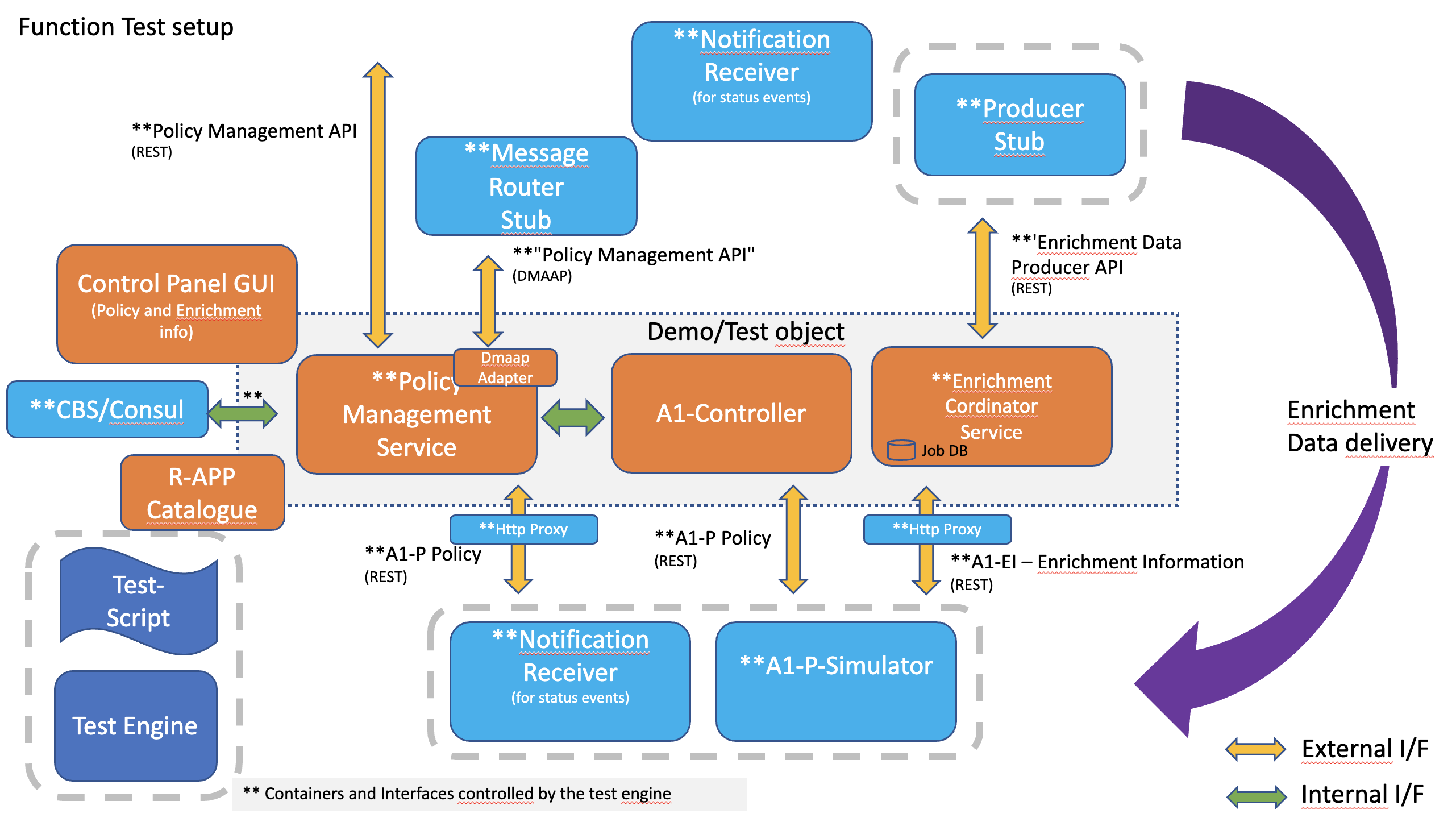 Note: The Control Panel GUI consist of two parts, control panel and the gateway for accessing the nonrtric components.

Note: When running in kubernetes, the test engine uses a proxy (not shown) for accessing the nonrtric components.

Note: The helm manager, Dmaap Adaptor and Dmaap Mediator components are not yet included in the function test setup.

The below table is a list of test cases. All scripts beginning with the letters "FTC" (Function Test Case) are considered test scripts to test functionality. The remaining test scripts are primarily used for demo purposes.
Note: Control Panel and its gateway are started in most test cases but not tested.

All function test scripts can be executed in your local environment. It is proven to work on MacOS and Ubuntu (brief tests has been made on Windows using git bash).

The test engine as well as all available test scripts is available in the nonrtric repo. Clone the repo and go to the auto-test directory:

Start the appropriate test script with the command below. No further action is required. The tests are fully automated. Once the execution is completed a test report is printed.

Example, run images from the staging repo - which is the default. To run only release images, add the parameter 'release' after the 'docker' parameter.

When running with images from the staging or release repo, it is still possible to point to images in the local repo or in the release, staging or snapshot repo for individual applications.

For further information and details, see README in the dirs 'auto-test' and 'common'.

"profile" refers to the name of the environment variable profile used when executed a test case. The profiles has the pattern 'test_env-oran-<profile-name>.sh in the test/common dir.