The Non-RealTime RIC (RAN Intelligent Controller) is an Orchestration and Automation function described by the O-RAN Alliance for non-real-time intelligent management of RAN (Radio Access Network) functions. The primary goal of the Non-RealTime RIC is to support non-real-time radio resource management, higher layer procedure optimization, policy optimization in RAN, and providing guidance, parameters, policies and AI/ML models to support the operation of near-RealTime RIC functions in the RAN to achieve higher-level non-real-time objectives. NONRTRIC functions include service and policy management, RAN analytics and model-training for the near-RealTime RICs. The Non-RealTime RIC project provides concepts, specifications, architecture and reference implementations as defined and described by the O-RAN Alliance architecture.

The NONRTRIC functions partly leverage and extend some existing infrastructure from ONAP to support non-realtime control of the RAN (Radio Access Network).

All implementations will be demonstrated in open community labs to prove functionalities and to give feedback to the O-RAN working groups.

The figure above shows a functional view of the Non-RealTime RIC function in OSC. Many of the functions will be supported by the underlying SMO platform. 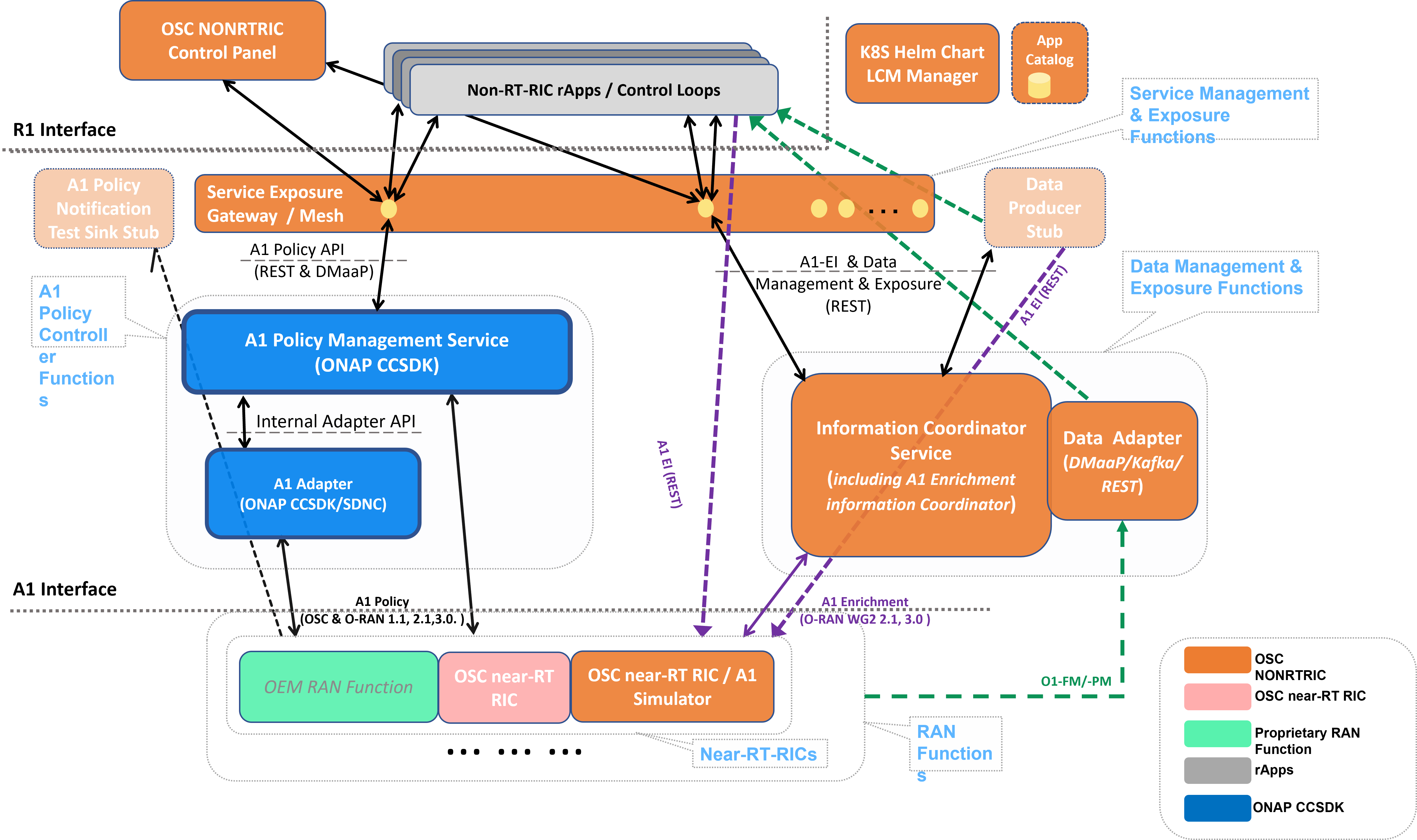 The figure above shows the latest released functionality for the Non-RealTime RIC functions in OSC (F Release & ONAP Jakarta).

The early vision for the O-RAN Non-RealTime RIC, and OSC NONRTRIC project, did not significantly differentiate between SMO platform and Non-RT RIC platform functions, where the main SMO requirements could be partly fulfilled by using a combination of OSC OAM, OSC NONRTRIC, and ONAP functions (See OAM Project: SMO - Service Management and Orchestration).

In the meeting from 2019-08-12 we clarified the (then) expected integration of ONAP and OSC OAM/NONRTRIC functionality.

Since then OSC has created an OSC SMO project.

In the NONRTRIC project we will reuse ONAP (and other open-source) functions where needed, and where necessary support changes upstream if needed. We strongly believe that open-source software should be reused where possible and appropriate, the maximize community participation and avoid community fragmentation. For example, we reuse and contribute to the A1 Policy Management functions in ONAP, which emerged from a merging of related activities in both OSC and ONAP. We also reuse numerous other ONAP functions, e.g. SDNC, Control Loop, Policy Framework, CPS, DMaaP, DCAE VES & PM functions, etc..